Referencing the story of Hansel and Gretel, architects Jacques Herzog and Pierre de Meuron and artist/activist Ai Weiwei recently leveraged unmanned aerial vehicle (UAV) technology to “explore the meaning of public space in our surveillance-laden world.” The exhibit was curated at the Park Avenue Armory in New York City.

The art was a result of six months of research, development and collaboration. PhotoFlight Aerial Media, a U.S. drone service provider, partnered with Easy Aerial, a drone tech company specializing in remote inspection and surveillance applications.

Part of the artists’ curatorial statement reads as follows, “The initial impulse for the project was to transform the vast Thompson Drill Hall into a public park, a place of free movement and play, open 24 hours and accessible from street level. Hansel & Gretel is, however, quite the opposite, a dystopian forest of projected light where the floor rises up, as if lifted by an invisible force, and visitors are tracked by infrared cameras and surveyed by overhead drones as they systematically capture the park­goers’ data and movements. Here the breadcrumbs of the famous Hansel and Gretel fairy tale are not eaten by birds but rather digital crumbs are gathered and stored, reminiscent of Ray Bradbury’s poignant, 1953 science-fiction novel Fahrenheit 451, where an omniscient state surveils its citizens from the skies.”

PhotoFlight says the partners used multiple drones simultaneously in a darkened, 55,000-square-foot exhibit hall consistently for two months. The UAVs were equipped with thermal cameras to capture imagery of people roaming about the exhibit space; it then transmitted live video to screens throughout the halls.

Rather than a net, a drone safety suspension system (DS3), consisting of a pulley and tether system, was used to ensure the safety of visitors. The DS3 was very carefully designed and thoroughly tested: It required each drone to be equipped with its own retractable leash (tether).

“We are proud of this innovation, to be the first ever to fly multiple drones simultaneously [and] indoors with such attention to safety and precision,” says David Weiner, CEO of PhotoFlight Aerial Media.

More information on the project can be found here.

What Does the Public Think of the New Drone at the L.A. Sheriff’s Department? 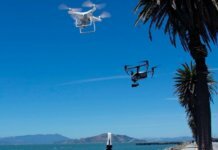 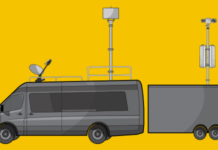 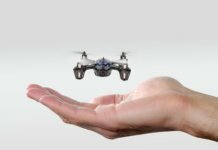 Miniaturizing the Brain of a Drone 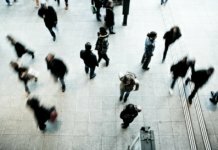 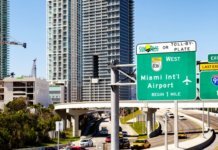