In the wake of Hurricane Maria in Puerto Rico, the Federal Aviation Administration (FAA) says it recently approved the first unmanned aircraft operation of its kind to help restore cellular service.

The agency OK’d AT&T to deploy its Flying Cell on Wings (COW) drone, which flies up to 200 feet in the air and provides LTE coverage for an area of 40 square miles.

AT&T explained in February, following tests above a field outside Atlanta, “Here’s how it works. The drone we tested carries a small cell and antennas. It’s connected to the ground by a thin tether. The tether between the drone and the ground provides a highly secure data connection via fiber and supplies power to the Flying COW, which allows for unlimited flight time. The Flying COW then uses satellite to transport texts, calls and data. The Flying COW can operate in extremely remote areas and where wired or wireless infrastructure is not immediately available.”

According to the FAA, the Pulse Vapor 55 drone, which looks like a mini helicopter, exceeds the 55-pound weight limit required to operate under the FAA’s Part 107 rules; therefore, the agency issued a special exemption and an emergency Certificate of Authorization to AT&T, which is using the aircraft as a temporary cell service solution while it rebuilds the permanent infrastructure on the island, the FAA explains.

“As we work to permanently restore our network, this experimental technology is providing data, voice and text services to customers,” the company said in a recent blog. “This is the first time an LTE cell site on a drone has been successfully deployed to connect residents after a disaster.” 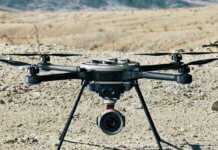