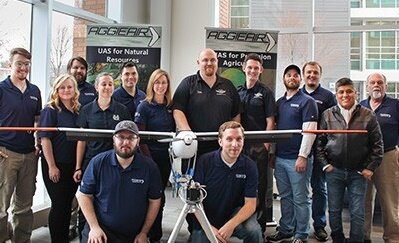 The university’s recent unveiling event coincided with a meeting of the GRAPEX group, a team of engineers and researchers developing improved methods of estimating water use in grape production. GRAPEX members include the U.S. Department of Agriculture’s Agricultural Research Service, Utah State University and its student-led AggieAir UAV program, and E&J Gallo Winery of Modesto, Calif.

“This aircraft represents the latest improvements in UAV technology,” says Dr. Mac McKee, director of the Utah Water Research Lab. “It can stay aloft for more than three hours and can carry a five-plus-pound payload of four different cameras. And the best part is it’s 100 percent student-designed.”

McKee says the first BluJay aircraft – nicknamed Darkhorse after a popular series of Gallo table wines – can fly a distance of over 200 miles and capture imagery over a 20-square-mile area. In addition, it offers a resolution of up to 10 cm by 10 cm. The goal, according McKee, is to capture data about soil and plant moisture properties. By combining UAV imagery with data from satellites and local weather conditions, the researchers plan to create forecasting information that significantly increases irrigation efficiency where water supplies are limited.

“UAVs will play an important part in precision agriculture,” adds McKee. “In the very near future, we will see more sophisticated tools coming available to farmers for making better informed operational decisions about irrigation, fertilization and pest control.”