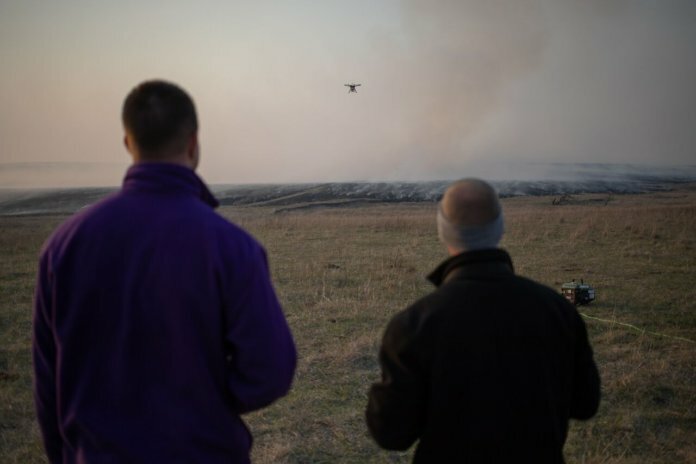 The three-year project is funded by the Kansas Department of Health and Environment (KDHE) and involves university scientists, NASA scientists, UAS pilots from the Kansas State University Polytechnic Campus, meteorologists, ranchers and environmentalists. The goal is to improve the environment and human health while balancing the livelihood of ranchers and farmers.

“We want to have our data be useful for keeping fire as a practice that is both ecologically acceptable and socially acceptable in the Great Plains,” says Carol Baldwin, project leader and a K-State Research and Extension associate in the College of Agriculture.

The team is collaborating with a Flint Hills rancher to gather data during typical tallgrass prescribed burns. The researchers have attached sensors on drones to gather air quality information during a burn.

The information is helping NASA verify satellite data products and is facilitating collaboration between KDHE and the Environmental Protection Agency to improve the Kansas Flint Hills Smoke Management Plan. The plan, implemented in 2011, helps ranchers make decisions about the best days to burn without negatively affecting human health, particularly in metropolitan areas.

In the past, when the weather conditions were right, Flint Hills spring burning affected air quality in Wichita, Topeka, Kansas City and metropolitan areas in Nebraska and Oklahoma. However, the fire is needed to maintain the integrity of the tallgrass prairie landscape, Baldwin explains.

“We need fire,” she says. “If we take fire and grazing out of the ecosystem, we will not have prairies as we know them. We will end up with a scrubby woodland.”

Current smoke management models, such as the Flint Hills plan, use data from fires in other parts of the U.S., not in the Great Plains, Baldwin says – and that’s a problem. The university-led project wants to get more accurate fire data from the Great Plains region by working with real ranchers during a typical burn.

“It is our hope that ranchers in the Flint Hills will use these tools to plan their burns so they do not impact air quality downwind from the fire,” says Doug Watson, air monitoring and planning chief with KDHE. “At the same time, we want to educate the metropolitan areas about the importance of the Flint Hills ecosystem and the reasons why the ranchers burn to maintain that ecosystem.”

To test a prescribed burn, the researchers are working with Jane Koger, a Matfield Green rancher. Koger has allowed the researchers to collect data before, during and after the annual burns on her ranchland.

The UAS pilots gather smoke emissions from a controlled burn by flying three drones into the smoke above the fires. The unmanned aircraft use continuous sensors and sample sensors to measure particles and ozone-causing chemicals, and they use thermal imaging to measure fire temperature. The continuous sensors use lasers to take measurements and send data, including particle concentration, ozone levels, temperature and humidity. The sample sensors have a small bag to gather and bring back air particulate samples that are analyzed for particulate matter, as well as nitrogen dioxide and volatile organic carbon levels. 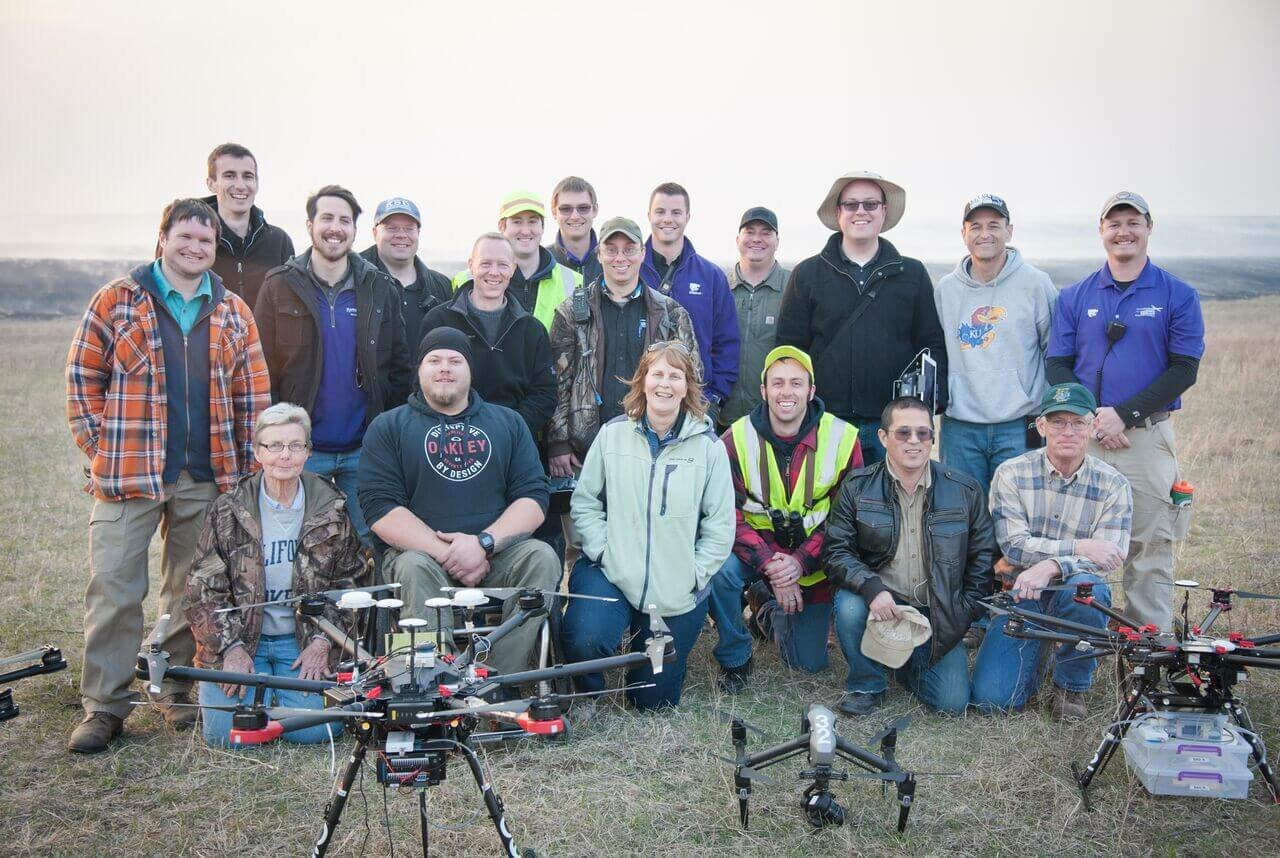 Travis Balthazor, UAS flight operations manager, is leading a team of 12 trained UAS pilots, including researchers and students with the Kansas State University Polytechnic Campus. The students are getting real-world experience through the project, Balthazor notes.

“This is outside the realm of our normal box, so this is an effort that benefits us in the long run,” he explains. “As far as operating aircraft and looking to the future of unmanned aircraft, everybody wants to fly beyond line of sight, and they want to fly higher. We are getting a taste of that with this project.”

Other project collaborators – including Deon Van Der Merwe, adjunct faculty member in diagnostic medicine and pathobiology in the university’s College of Veterinary Medicine – are using the unmanned aircraft to estimate fire size by flying aircraft above grassland before a prescribed burn to determine how much grass, trees or shrubs are in the area.

For rancher Koger, the research project can help ranchers like her learn how to maintain the tallgrass prairie without damaging their livelihoods, says the university.

“I think it’s important to get a better understanding of what we are doing and what we are putting into the air,” Koger says. “We have kids and grandkids, and some of them have asthma. It does affect all of us. When we have concrete science – and when K-State shares that – ranchers listen. Getting some numbers and knowing what we are really doing and getting that back out to the public will speak to people.”