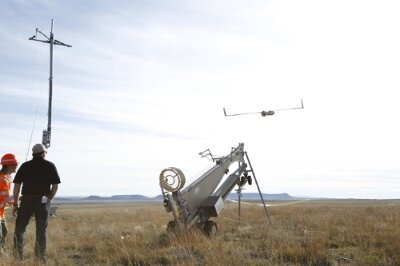 In partnership with BNSF Railway and the Federal Aviation Administration (FAA), Insitu says it has completed the first FAA-approved, commercial, beyond visual-line-of-sight (BVLOS) operation with an unmanned aircraft system (UAS) in the contiguous 48 states.

The Oct. 25 event near Vaughn, N.M., marked the beginning of a weeklong series of flights with BNSF Railway to show how unmanned aircraft can be used to enhance railway safety and infrastructure inspection. The flights are part of the FAA’s Pathfinder program.

In its first day of operations, Insitu’s ScanEagle UAS provided real-time video covering 64 miles of the 132-mile stretch of track BNSF has designated for the exercise. The flights will continue through the end of the week.

The ScanEagle is capable of flying for up to 24 hours at speeds of up to 80 knots.

“We are honored to partner with BNSF and the FAA to explore how our technology can extend the capabilities of manned resources to support the safety of critical infrastructure and the people charged with inspecting those assets,” says Ryan M. Hartman, president and CEO of Insitu. “Our systems have been flying globally for more than a decade, and these operations are a positive opportunity to further inform the conversation surrounding the safe integration of unmanned aircraft into the national airspace.”

“Our Pathfinder project is expected to be a significant enhancement to the tremendous amount of data and information we already gather as part of our track inspection program,” adds Greg Fox, executive vice president for operations at BNSF Railway. “The capabilities these aircraft have to gather additional intelligence that can then be fed in real time to track inspectors on the ground will fundamentally enhance our program and the safety of the our railroad while helping to keep our people safe in harsh and extreme conditions.”