Australia will be home to Boeing’s largest autonomous systems development program outside of the U.S. following a new partnership agreement with the Queensland Government.

Over the next three years, the rapid innovation program will see Boeing develop next-generation autonomous systems capability in Australia to increase the independent operation of air and sea vehicles, the company says.

In a previous collaboration, a broad-area unmanned aircraft system (UAS) situational awareness system developed by Boeing in partnership with Queensland businesses was exported to the U.S. in late 2017 and successfully completed its first flight test in Mississippi this past January.

Equipped with technology from Queensland firms, the Albatross, an electric, fixed-wing drone made by U.S. unmanned aerial vehicle (UAV) manufacturer Applied Aeronautics, was on display at the recent signing of the new partnership.

“In addition to being affordable, the Albatross was designed to be an entirely customizable platform,” says Ryan Johnston, CEO of Applied Aeronautics. “The Albatross’ use by leading Australian companies is an excellent example of its ability to be tailored to the individual needs of the end-user. This adaptability allows for the development of a truly unique UAV solution for applications ranging from research and public safety to mining and agriculture. We’re excited to see the Albatross used in this capacity in Queensland.” 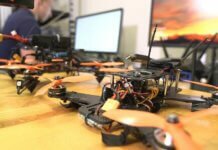