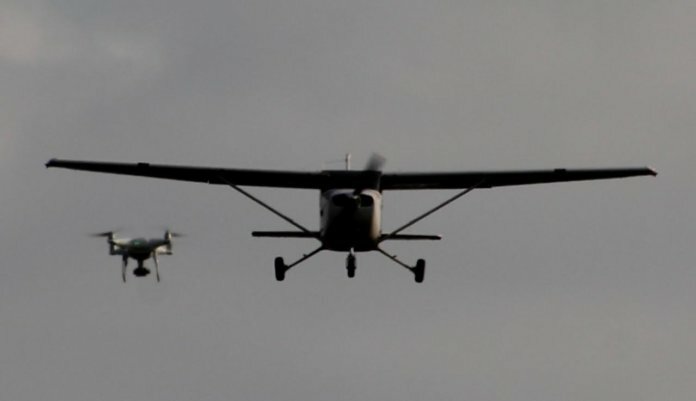 During an airborne human factors experiment, certificated pilots failed to see a common type of quadcopter during 28 of 40 close encounters, according to the researchers.

In other words, the pilots got a bead on the invading drone in 12 out of 40 cases, or only about 30% of the time. When the drone was not moving, the task became even more difficult: A mere three out of 22 motionless drones were spotted by the pilots. Drones were detected at distances of between 213 and 2,324 feet.

These findings, published in the International Journal of Aviation, Aeronautics, and Aerospace (IJAAA), illustrate a threat to aviation safety, according to Dr. Ryan J. Wallace, assistant professor of Aeronautical Science at Embry-Riddle.

“Dangerous close encounters between aircraft and drones are becoming an increasingly common problem,” Wallace says. “Statistics on pilot sightings of drones continue to increase year over year, and what is being reported by pilots is probably just the tip of the iceberg. The vast majority of the time, unmanned aircraft are not being seen by pilots.”

Even in a best-case scenario, if a drone was spotted at the study’s maximum detection range of 2,324 feet, the pilot would have only about 21 seconds to avoid a collision.

“That might be enough time if the drone was hovering in one spot, but not nearly enough if it’s in flight, headed for the aircraft,” says Dr. Matt Vance, assistant professor of aviation and space at Oklahoma State. “The situation is far more dangerous when both aircraft are moving. Our eyes are attuned to movement. When a drone is not moving, it becomes part of the background.”

An aircraft’s final approach for landing is an especially risky time for a drone encounter because “it can catch you unaware, and you have little time to react,” explains Dr. Jon M. Loffi, associate professor of aviation and space at Oklahoma State. “You don’t have the altitude to maneuver safely, and if an engine ingests a drone, that could bring the aircraft down.”

The research examined what happens as a pilot prepares to land and switches from instrument-guided flight to visual flight. Pilot participants were selected from a collegiate flight training program. During the experiment, pilots conducted an approach to landing in a Cessna 172S while a DJI Phantom 4 quadcopter drone flew a scripted series of maneuvers along the approach path. Pilots were told that they might or might not encounter a drone.

The research team’s next project will involve rigging a drone with an electronic pinging device (UAvionics Ping), which uses ADS-B (automatic dependent surveillance-broadcast) technology to track aircraft. The study will assess whether the technology helps pilots pinpoint and avoid a collision with the drone.

The study, “Cleared to Land: Pilot Visual Detection of Small Unmanned Aircraft During Final Approach” was co-authored by Wallace, Vance and Loffi, along with Jamey Jacob, Jared C. Dunlap, Tyler A. Mitchell and Seabrook R. Whyte of Oklahoma State, as well as Robert Thomas of Embry-Riddle. The research can be found on the IJAAA website.