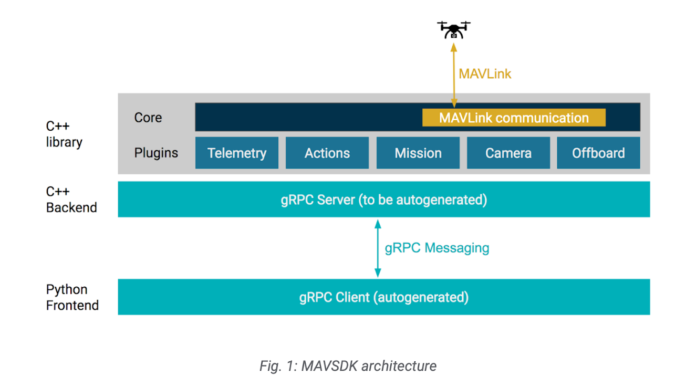 Auterion, an open-source operating system for enterprise drones, has introduced MAVSDK, a set of libraries in different programming languages (e.g., C++, Python, Swift and Java) to provide a high-level API to the MAVLink protocol for communication between a ground control station and drones, or the drone and a payload sensor.

Formerly known as Dronecode SDK, MAVSDK includes all the features of the previous release, along with several improvements. For example, according to the company, this new release makes it easier for users to develop applications in various programming languages. It also provides pre-built software libraries that allow developers to install MAVSDK and run scripts that automatically enable a variety of actions within minutes, such as take-off and landing, flying to set coordinates or waypoints, or activating sensor payloads.

“Until today, customizing operations in the MAVLink protocol required a deep understanding of complex subjects such as embedded systems, drone dynamics and the C++ programming language,” says Kevin Sartori, co-founder of Auterion. “Now, with MAVSDK, any qualified mobile developer can write high-level code for complex operations, meaning more developers will be able to build custom applications and contribute to the community.”

Notably, given the open nature of the MAVSDK, the goal is to enable a grassroots approach to innovation by sharing and collaborating with different actors (e.g., service providers or manufacturers) on a common API without hindering them from diversifying and improving, the company explains.

Auterion, as the largest contributor to the project, says it is committed to investing in and maintaining MAVSDK.