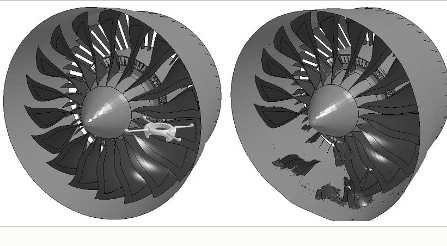 Regarding the potential damage drones can bring to passenger aircraft, Virginia Tech researchers are urging changes in how commercial aircraft engines are designed.

According to Virginia Tech, certain drones that are sucked into a plane’s turbofan engines – be it unintentional or part of a malicious act – would be devastating to the engine, as the blades could be ripped to shreds after ingesting the hard-shell center of a drone’s electronics housing.

Computer-simulated tests completed by researchers at Virginia Tech’s College of Engineering show specifically that an 8-lb. quadcopter can rip apart the fan blades of a 9-ft.-diameter turbofan engine during takeoff in less than 1/200th of a second.

Virginia Tech says the speed of drone debris thrashing about inside the engine could reach speeds 715 miles per hour. Broken blades also would create more fragments as the fan crumbles and warps the engine block housing and thus contributes to catastrophic engine failure.

“Because the damage is spread to a large section of the engine, it is unlikely that it will be able to maintain thrust,” explains Javid Bayandor, an associate professor of mechanical engineering at Virginia Tech and director of the university’s Crashworthiness for Aerospace Structures and Hybrids (CRASH) Laboratory.

Work originated three years ago when the group used computer modeling to study the impact of birds on advanced turbofan aircraft engines. The efforts switched to drones as more reports spread of unmanned aircraft spotted by manned aircraft pilots, the university says.

“Because of the unprecedented damage a small or even micro unmanned aircraft system can inflict on a passenger aircraft, pilots cannot risk flying in the same airspace where there are drones,” says Bayandor. “While strict regulations are already in place to isolate drones from operations in controlled airspace, their enforcement has proven challenging due to the anonymity of drone users.”

Federal aviation regulations require commercial aircraft to adhere to design criteria that help ensure the aircraft’s survival after a midair collision with objects such as birds. However, little investigation has been conducted on the ingestion of drones, says Virginia Tech.

Both O’Brien and Bayandor urge that more education on safe drone flight use is vital; the team is already exploring various methods that could be used to prevent critical collisions of drones and aircraft.

The team notes that engine-failure rates and timing can change with different commercial aircraft and different relative impact velocity between the drone and the plane.